Gold #11, the furthest upstream of the three claims, was found valid in 1986 and mined seasonally until about 2006. The mining claim owner was not allowed to land a helicopter in the Wilderness or use one to transport personnel. In fact, no motorized transport was ever approved to Gold #11, which was well off the wilderness trail system.

In 2008, Chetco River Mining and Exploration (CRME) purchased the almost 24 mile long string of  mining claims. After going into Gold #11 on foot for the first time with the Forest Service in 2009, the new owners decided this was not for them. Their new mining plan for Gold #11 said helicopter access was needed because of the long and dangerous land route through the Wilderness.

They also submitted a plan to the Forest Service for a second Wilderness mining operation and were advertising the sale of the other claim for $100 by the lineal foot. Read more about CRME's proposals for the now forfeited claims in the March 13, 2010 Oregonian.

A cautionary note:  The nine Chetco River mining claims, spanning in total over 20 miles of river, were forfeited in 1995 but were reinstated after the claimant filed a timely appeal. Read the IBLA ruling here.  However, CRME failed to file a timely appeal of the 2011 forfeiture. According to the Bureau of Land Management's lead land law mineral examiner, now CRME's "only recourse would be to go to court."

A costly half century struggle against mining in the Kalmiopsis Wilderness: There's a long history of legal struggles, abuse of mining law privileges, illegal access and illegal road and landing strip construction in the Kalmiopsis Wilderness and Wild Area. In 1999, the federal government spent $3.2 million to purchase a recently patented mineral right on the Chetco River at Taggart's Bar. The claimant had just paid the federal government $2.50 per acre for the mineral rights on 145 acres of Wilderness. At the same time he relinquished the right to over 2100 acres other mining claims in the Wilderness.  Read the Medford Mail Tribune article about the purchase.

Read more about this gift to the wilderness and the Wild Chetco River.

Pre-update discussion of mining threats in the Kalmiopsis Wilderness

Almost a half century after Congress protected the upper Chetco River Basin as the Kalmiopsis Wilderness, the river, the wilderness and the public's enjoyment of both are still threatened by mining.  In a long struggle, the hundreds of mining claims that existed in the Wilderness in 1964 have been reduced to three in number.  The three are on the mainstem of the National Wild and Scenic River between Chetco Bar and the Wilderness boundary.  The were purchased by Chetco River Mining and Exploration (CRME) in 2008.

The company wants to use gasoline powered suction dredges to mine the river for gold and the luxury of helicopters to access the mining claims, which are located in one of the most rugged and remote parts of the Wilderness.  In 2010, CRME's staff hiked about 12 miles into the Chetco River claims with their paid guide and the Forest Service.  As a result, their mining plan says this land route "is challenging and dangerous on foot or by kayak."

They argue helicopter access is needed because of the "risk of injury or death due to [the] travel distance and its natural hazards" and that the "length of [the] trail is overbearing." They say they will use a private inholding in the Kalmiopsis Wilderness (on the Little Chetco River) as a "staging area" for their helicopter flights to mainstem Chetco mining claim. The inholding was Wilderness until 1988 when, under the 1872 Mining Law, it was taken from public ownership and its title transferred to private interests for $2.50 per acre.

However, an unexpected twist in the form of an Oregon Administrative Rule and the Clean Water Act has stalled CRME's plan to exploit the beautiful Wild Chetco River and its Wilderness watershed.  The rule was established under Governor Tom McCall.  A lawsuit by mining groups against the State of Oregon brought it to light during Governor Ted Kulongoski's last term.  The baton has been passed to Governor John Kitzhaber to implement it.  The rule compliments Congress' visionary goals when they established the Wilderness Preservation system in 1964.

Since purchasing the three Kalmiopsis Wilderness mining claims, Gold 9, 10 and 11, CRME has submitted a number of mining proposals.  The latest include a mining plan of operation for Gold #11 and a mining plan the Rogue River-Siskiyou National Forest considers still as draft for Gold #10.  Note - CRME has also submitted six mining plans for the National Wild and Scenic Chetco River outside the Kalmiopsis Wilderness.  This is the area that's subject to the Chetco River Protection Act.

CRME's agent, also operating as Oregon Gold Trips, purchased, the only inholding in the Kalmiopsis Wilderness on the Little Chetco River.   The 45 acres was part of the Kalmiopsis Wilderness, owned by the public, until 1988.  But 24 years after Congress designated the area as Wilderness, title to the land covered by three mining claims was transferred to a private party under the patenting provision of the 1872 Mining Law.

Even in the 21st century, if a mining claim mets the all the requirements of the law, there is no choice.  The public cannot say not to the sale of their heritage lands and the 1872 Mining Law sets the price—in this case $2.50 per acre.   See also AP on Crested Butte Colorado's effort to overturn an 1872 Mining Law patent for 155 acres that was granted in 2004 for $875.00.

The Little Chetco patent also included the mineral estate on adjacent 15 acres.  The surface estate on the 15 acres is still Wilderness.   A mining plan has been submitted to mine the 15 acres but is still considered as draft by the Rogue River-Siskiyou National Forest.

Note - The federal government also retained rights for the public to use the two existing Wilderness trails that cross the 45 acres of now private land though that can be a little intimidating because hikers are met with signs like this:

CRME's mining plan for Gold #11 is furthest along in the process.  The Forest Service estimates that the cost of preparing the environmental impact statement for the mining of Gold #11 at $431,000.  While these mining claims were located under the 1872 Mining Law, CRME's mining plan for Gold #11 includes the use of gasoline power suction dredges to mine the Wild Chetco river and helicopters to access the Wilderness mining claims.  CRME staff, after their first trip through the Wilderness to Gold #11 with Rogue River Siskiyou National Forest staff, found the Kalmiopsis Wilderness to dangerous and life threatening to hike in as other wilderness users are required to do.

However, in an unexpected twist in the struggle to preserve Wilderness values and character and the Wild Chetco's nationally outstanding water quality and world class fishery, the State of Oregon seems to have a big say in the matter of Wilderness mining.  After mining groups sued the State of Oregon over the 700-PM general instream mining permit, a little known Oregon Administrative Rule for Wilderness Areas came to light.

The rule, established during the administration of progressive Republican governor Tom McCall, prohibits the increase of turbidity in waters of Oregon Wilderness Areas designated prior to 1972.  To comply with the rule, the 700 PM permit states:

Since the clarity of the Chetco River approaches that of distilled water in the Wilderness, this is a hard standard to meet.  In fact, the Forest Service has already demonstrated that mining the Chetco River with a suction dredge will increase turbidity and violate the rule. 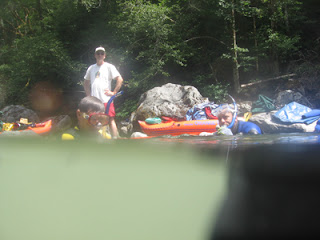 The Rule also includes a prohibition on noise pollution exceeding 50 dBA at any point 50 feet from the source.  This would apply to both the suction dredge and the use of helicopters.

The Oregon Administrative Rule could have profound implications for preserving wilderness values and the nationally outstanding water quality and world class salmon and steelhead of the Chetco River.